A new study by the Scottish Public Health Observatory has reviewed the potential effects on health of a series of interventions.  The effects on health are considered mainly in terms of mortality and the need for hospital care.  The measures in relation to incomes, cutting alcohol, tobacco or obesity, and encouraging cycling and walking to work. 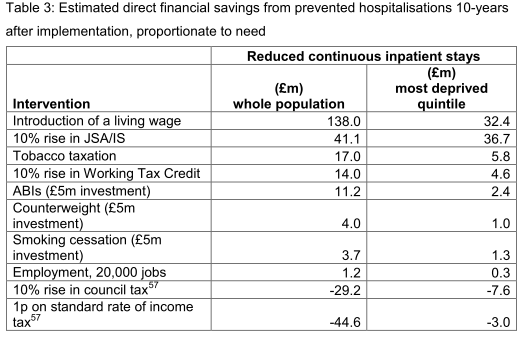 The biggest benefits, by far, would be gained by the introduction of a living wage; the next biggest, though it is even more important for the poor, would be an increase in minimum income benefits.  Some of the measures they are being compared to seem restrained – a weight-management service rather than measures to reduce sugar, short-term interventions on alcohol rather than taxation by unit – but the size of the difference is so big that it’s unlikely to  tilt the table.