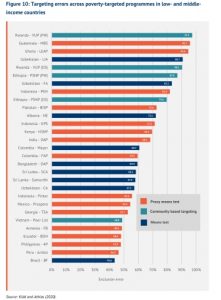 Richard Murphy has posted a rather gloomy blog entry, outlining many of the things going wrong in Europe and America.  He points, among other things, to Brexit, populism, growing inequality and economic and political instability. 2019, he thinks, ‘is going to be horrid’.  While I can’t gainsay any of the grim predictions he offers, I think there are other grounds for optimism, mainly from the developing world.

2019 might well be horrid, but it may not be quite as horrid for everyone as it threatens to be in the UK.  Happy New Year.

The World Bank has published a series of graphics outlining progress on the Sustainable Development Goals. I’m hopeful that this example will display properly on your systems and that you’ll be able to see what I’m seeing.  Click on the arrow in the centre to see the animation.

Among the many other insights, the graphs show that in many places boys are more likely to suffer malnutrition than girls, and that cash transfers – including unconditional cash transfers and pensions – are the most likely form of social protection to benefit the poorest.

A review of the effectiveness of proxy means tests by Brown, Ravallion and van de Walle finds that they are not an effective way of concentrating resources on the poor. The process is simply not accurate enough.

“Standard PMTs help ﬁlter out the non-poor, but exclude many poor people, thus diminishing the impact on poverty. … The prevailing methods are particularly deﬁcient in reaching the poorest.  … The most widely-used form of PMT in practice does only slightly better on average than an untargeted universal basic income scheme, in which everyone gets the same transfer, whatever their characteristics. Even under seemingly ideal conditions, the “high-tech” solutions to the targeting problem with imperfect information do not do much better than age-old methods using state-contingent transfers or even simpler basic income schemes.”

Proxy means tests are being used because poor countries just don’t have the quality of information to make fuller assessments work.  As many critics of means testing have pointed out, richer countries don’t have the capacity to do it either.  People’s incomes fluctuate, boundary problems are intrinsic, people don’t understand what should be included and what should not be, and take-up is consistently poor.

There is however one large reservation to make about this study’s findings.  There have to be doubts as to whether any country, rich or poor, really has the capacity to produce the kind of information that detailed quantitative studies of this kind call for.  This study points to the difficulty that any test has in determining whether or not specific individuals are poor.  The standard they use to verify the connections, household consumption, is not absolute proof of poverty; it’s an indicator.  It’s probably more valid than some other indicators, but it isn’t perfect and it is just as difficult to collect as income.  I happen to agree with the paper’s conclusions about proxy means tests, because they happily coincide with my own judgment, but nothing can be supposed to be proved beyond doubt; the core information that the analysis is built on is not good enough, and it cannot be.

A  report from Stephen Kidd about Mongolia and Kyrgyzstan tells us that the IMF have been forcing governments to limit the scope of universal benefits for children.  At a time when the evidence for universal programmes in less developed countries has rarely been stronger – see, for example, S Davala, R Jhabvala, G Standing, S Mehta, 2015, Basic Income –  this is deeply depressing.

I discuss the issues about targeting briefly on my social policy website.  If “targeting” means that there’s a choice of group (for example, payments to pensioners or nursing mothers), it can work.  Targeting “the poor” is much vaguer and more difficult to do effectively.  The process is complex and hard to do with any precision; some favoured methods, such as geographical selection, really don’t work well.  A report by Australian Aid,  Targeting the poorest, found that for poor people the process could seemed bizarrely random, with outcomes that they attributed to luck or divine judgment.  The evidence suggests that selectivity is rather more effective at stopping people from getting benefits than it is at getting them to the people who need them most.  By contrast, universal benefits work.  Arguing to scrap benefits that work and replace them with rules that don’t makes very little sense.

Tunisia is reported to be improving its social security system. They’ve aimed to offer a stable minimum income, comprehensive coverage and provision for decent housing.  The amounts being offered are not large: an increase from 70 dinars a month (less than $29) to 150 dinars earlier this year and now 180 dinars (a bit under $74), a little extra (10 dinars) for each child in school, a fund for loans to house buyers, and exemption from fees for medical care (but I don’t know enough to say how that is actually going to work).   The national GDP per capita now seems to be in the region of $10,800 (USD), so the benefits are not likely to be enough to live on.   Having said that, the commitment to extended  coverage is a big deal: Tunisia has previously been reported as having something on the region of 80% coverage, and the people not covered before included agricultural workers, domestic servants and unemployed people.

The extension of coverage in low to middle income countries in recent years has been remarkable.  In a recent lecture, Minouche Shafik of LSE pointed to the rapid growth of a range of welfare measures across the developing world – more than 80 have social security pensions, more than 120 have some unconditional cash transfers.  Around the world, she argues, the “state” is coming to mean a “welfare state”.

Yesterday I received a circular request to sign a petition to have an academic article taken down.  The article in question is  “The case for colonialism“, written by Bruce Gilley, and published by Third World Quarterly. For Gilley, anti-colonialism has justified practices that are worse than the colonial systems they replaced; he tries to justify colonialism on the balance of costs and benefits. There’s a forceful rebuttal of the arguments by Nathan Robinson in Current Affairs:

“Truly unspeakable harms can simply be “outweighed” and thereby trivialized.  … Building power lines and opening a school doesn’t provide one with a license to rob and murder people.”

Being concerned about contemporary policy, I’m less concerned about the historical revisionism than about the mis-characterisation of current issues in development.  There have been massive improvements in much of Africa in recent years, and they have not happened by magic.  Gilley suggests that

The agenda he’s criticising makes no such assumption; on the contrary, it’s about creating capacity.  The process has encouraged governments to recognise their limitations and to work collaboratively with a range of stakeholders and partners.  Just the sort of thing that colonial governments didn’t do and that international organisations have had to learn.

Gilley’s critics have described the argument as “racist” and “white supremacist”; neither of those is justified by its content.  The article is provocatively written, somewhat cavalier about evidence and possibly slightly bonkers. Does it follow, though, that it should be withdrawn from circulation?    The proper response to anything of this nature is to make the case against it, not to have it expunged from the record. When I’ve taught students about ethics and policy in the past, I’ve sometimes given them extreme positions to consider – arguments for torture and infanticide amongst them. I’ve wanted them to be able to respond cogently and fluently to offensive views, because in real life speechless rage doesn’t win the day. I’d have had no hesitation in getting students to write a critique of this paper.  Students tend to be far to deferential to the things they read; a healthy disrespect for the printed word is something to be encouraged.

Developing a system of social protection is a fundamental part of building a nation, but I’m not banging on about Scotland again.  I’ve been looking at a short report from the Center for Economic Research in Uzbekistan, which is not a place I know anything about.  Their figures can be difficult to interpret, and they’re not helped by claims that “Taxes in Uzbekistan are considerably lower than in Scandinavia” or that “As in the Scandinavian model, Uzbekistan has large social expenditures” (hardly).  Uzbekistan is a very poor country, with income per capita less than a sixth of neighbouring Kazakhstan (though, intriguingly, with a better record on infant mortality).  The plan envisages steady growth of 7-8% over the next twenty years (without being very clear how this is going to happen)  and assumes that  the relative costs of social protection will fall as income increases (which is questionable).   The issues they identify are that the problems of industrialisation – people are moving out of agriculture at speed – and they point to the need to develop better education, health services and labour market policies.  I’ve argued before that growth, and greater consumption, are basic to the aspirations of people in poorer countries.  This is what many of the world’s emerging countries have been created to do, and social welfare provision is a major part of it.

Here’s some good news, for once, which I was pointed to by a report about China in the Economist.  International organisations have identified ten countries which have made exceptional progress in keeping children alive.  The basic figures are here; a report explaining what those countries have done to achieve it is here.  A substantial part of it is the improvement in the health of the mothers.

This item, which I have from the Economist, is one of the strangest reports I’ve seen in years.  Assessments of GDP are supposed to be regularly revised, and Nigeria has not done it in an age.  In its latest revision, the assessment of GDP has grown by 89%, making Nigeria the largest economy in Africa.  GDP per capita has risen from $1500 a year to $2688.

At the same time, Nigeria also has one of the worst rates for infant mortality in the world.  UNICEF puts the death rate for under-5s at 124 per 1000.  This is much better than it used to be – there have been improvements across most of Africa – but Nigeria’s rating is still the 9th worst in the world.  There are more important things than GDP.