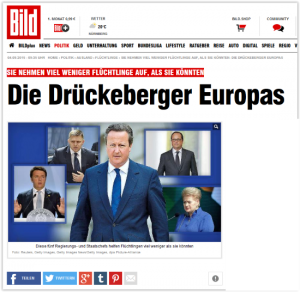 The ‘crisis’ at Calais may be small beer by comparison with the issues in Hungary, Greece and Italy, but clearly it has implications for both the British and the French government.  My sympathies, I should declare,  are with the migrants.  I come from a long line of refugees – my father left France in 1940; I am the first male member of my family not to have to leave his country in five generations.  Some of the arguments that are being made about the ‘swarm’ of migrants are preposterous.  They should not be trying to enter the country illegally.  What options do they have to enter legally?  They should apply in their own countries through the proper channels.   So …  what do the proper channels in Syria look like?   They come with no identity papers.  A standard part of fleeing the country is that you dump papers so that you won’t be sent back to die.   The Guardian cites the UN special representative on migration:  “Many of those in Calais are refugees, just as the Jewish people were in 1939.”

The people at Calais have come from very different places – some from war zones, some from chaotic regimes, others from very poor parts of the world.   Some of them have a strong case for asylum; others may not; but the authorities in Britain and France don’t seem to be doing anything to differentiate them. The first duties fall on France, which is behaving disgracefully.  Where people are stateless, France has a legal duty to receive them.  When they are seeking asylum, France has a duty to process the application and admit them if the claim is justified.   Where there are unaccompanied children, France should be intervening to provide care.  Where a person has no case to remain, there is no justification for leaving that person to settle in a makeshift camp in Calais.   The second set of duties fall on Britain.  Britain has not yet accepted a proportionate share of people seeking refuge in the EU.  It is using border controls to make up for the inadequacy of its domestic arrangements:  people could not live and work illegally in the UK  if we applied the same rules about residence, housing occupancy and employment that are applied in most of the EU.  And, of course, once someone gains the status of a French citizen, they are legally entitled to seek work in Britain.  We might as well take them now.

4th September, 2015:  I have added a clip from the German newspaper, Bild, published on 31st August.  It refers to ‘the shirkers of Europe’ and the strapline is, ‘they help far fewer refugees than they could’.