It’s being reported that Universal Credit is to be delayed again.  There are also suggestions that a small number of minor tweaks will be made – allowing legacy benefits to run on for two weeks, changing direct payment rules and altering rules for self-employment.  None of that really gets to the heart of the problems.  The system is simply not designed for the variety and complexity of conditions it is supposed to deal with.

The BBC offers this graph of delays, citing the National Audit Office as source.  It’s kind to the record, because it waves aside the failed attempts that led to the system being “reset” in 2013.  The original deadline for the completion of the rollout was not 2019, but 2017.  The planning has, of course, been going on since 2010, and at no stage has it ever seemed likely that UC could be delivered, as Iain Duncan Smith repeatedly claimed it would be, on time and within budget. 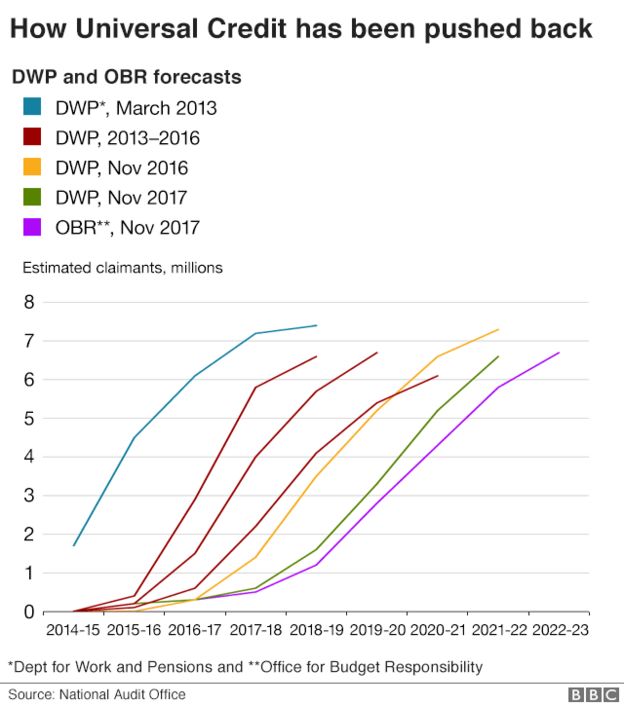 I’ve been blogging about the problems with Universal Credit since October 2010, and complaining about the bogus claims made for it since the first glimpse of a business case in 2013.    The Treasury failed altogether to follow its own procedures, undertaking massive expenditures before any plan had been submitted.  The lack of routine scrutiny has been scandalous; but not as scandalous, I regret, as the way that claimants have been treated in the hope of sparking life into the monster.