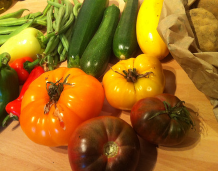 Richard Murphy has written several blog entries on the possibility of environmental taxes, including a tax on the consumption of products from cows, sheep and goats, because of the environmental damage done by the livestock industry.  He hopes that this will promote a shift towards consuming vegetables instead.

The objection I have to this kind of scheme is much the same as the objection I raised to the Green proposal for workplace car parking levies.  I replied to Richard in these terms:

There are two key problems with attempts to direct behaviour through ‘repricing goods and services’, and your proposal to tax foods derived from animals suffers from both of them. The first problem is that repricing is a blunt instrument. Changing the relative price of goods also changes the relative price of possible substitutes, and the substitutes may be as bad or worse than the options that are being controlled. What would you do, for example, if it emerged that the high relative price of dairy products prompted an increase in the consumption of environmentally destructive palm oil? Now I’ve pointed to the problem, you can probably say that it ought to be restricted too – but for any policy which takes in such a broad sweep of behaviour, there’s a limit to how many outcomes you can anticipate and provide for. There are nearly always more, unexpected consequences that aren’t visible until the damage has been done.

The second, and more important, objection is that repricing can (and often does) have unacceptable distributive consequences. Many environmental taxes have the effect that they allow richer people to carry on as they were, while poorer people suffer the restrictions and bear the cost – congestion charging is a clear example. And the thought of increasing the price of staple dairy products at a time when people on low incomes are going without food and having to seek help from food banks is frankly alarming.

The central flaw in the argument lies in one of the standard assumptions made in economic textbooks, which is that supply and demand can be controlled most effectively through the price mechanism. I’ve argued in my own blog that rationing by price is rather inadequate as an instrument of public policy. It offers nothing to protect us from inappropriate inclusion or exclusion from access to resources, and while some people think it’s a fair procedure (which is debatable), it is unlikely to be fair in its effects.

Richard took it that I must be arguing for a free market, when in fact I’m arguing the opposite; some things are not well left to the market, and attempts to tweak the price mechanism have unpredictable and undesirable affects.  Traditional markets don’t work.  But something else might.

Those of us who have been around for a long time might remember the Marketing Boards:  Eggs, Milk, Meat and Wool.  Despite the name, these schemes did something far beyond ‘marketing’: they took over the bulk of the markets, guaranteeing returns to producers, subsidising prices for consumers, and avoiding the problems of instability for which agricultural markets are notorious.  Here is a description of the egg marketing scheme from Hansard in 1956, as proposed by the Conservative government of the day.

Changes in supply and demand do not have to be very large before biggish changes occur in the price, which may have a disrupting effect and leave room for harmful speculation, with all that that entails….The board will have power to require that by far the great majority of eggs produced for the wholesale market will be sold by producers only to the board. … Every day the board will fix its selling price for eggs, and the distributive trades will be able to purchase those eggs from it at the prices settled. Any unsold eggs will be retained by the board and will be either moved to other markets or stored, for sale later.

In other words, the Board took over major aspects of production and distribution, protecting producers to an agreed level and ensuring consumers had access to a quality product at a stable price.

Britain eventually abandoned these policies, for two reasons: first, because food production was no longer seen as essential for national defence, and second because the UK joined the Common Agricultural Policy instead (it’s a markedly inferior system – unlike the Boards, the CAP rewards both excess production and acquisitive land ownership).  Only the Wool Marketing Board still exists, a collective, non-profit organisation that manages a centralised distributive market for fleece wool.

If we want to have general, secure access to vegetables at a subsidised price, taxing the alternatives to vegetables is not the best route.  And if we want to promote the consumption of vegetables, it may make sense to focus on that rather than developing policy relating to meat and dairy products.  Should we perhaps be thinking about a Vegetable Marketing Board?