We have moved into lockdown, and the government has still given little thought to how to protect the situation of people on very low incomes.  The main concessions relate to the failing system of Universal Credit: work allowances and benefit levels have been increased, the presumptive income of self-employed people no longer applies, and new sanctions have been suspended.  Universal Credit is not, however, equipped to respond to people’s circumstances even in normal times, and it cannot cope with the surge in applications.

First, people have to apply. 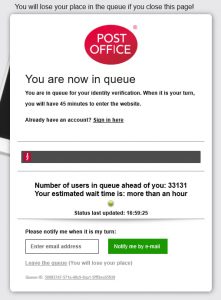 This is a clip posted on Twitter by an applicant looking to verify his identity:  it will take nearly a month for the position to rise to the point where it can be dealt with and then there is a 45-minute window to respond.  After that, there is a five week wait for benefit delivery. Claimants are offered loans to fill in the gaps, which means a long-term reduction in the future amount of support available.

What are the alternatives?  There is a strong case being made currently for something like a Universal Basic Income.  UBI only provides people with cash, but that meets the present situation: there are plentiful supplies of goods, and what we need to do at present is to make sure that people have the resources to buy them.  I’ve objected to the idea in the past, mainly on two grounds: the distributive impact, which is likely to exclude people on existing benefits, and the opportunity cost.  Neither of those reservations really applies to the present situation.  The government could do worse than offering a flat rate payment to everyone.

However, the mechanisms to deliver a universal income don’t currently exist, and in a crisis, we need to be considering what can be done quickly and immediately.  There are three benefits which have widespread coverage, making it possible to make special payments using mechanisms that are already in existence.

It should be possible, then, rapidly to make arrangements to make special payments,  with minimum fuss and no additional verification, to up to 37.5 million people (17.5 + 12.7 + 7.3).   It’s not ideal, but we need to find mechanisms that are practical and effective; this would cover a lot of the ground that needs to be covered.

This still leaves a large hole: the position of adults of working age who have no children.  The government obviously hopes that employees within the PAYE system can be supported through businesses, using roughly the same mechanism as Statutory Sick Pay – it won’t work, unfortunately, for the most precarious workers, or self-employed people.    I’ve canvassed in the past another option: make the tax allowance convertible, so that people can claim the equivalent in cash.   That should, in principle, cover most of the people left out by the first proposition, with the added advantage that people who already have sufficient taxable income will be paying it back in tax.