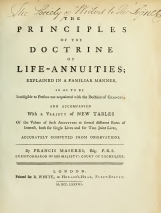 I found a copy of Nicholls’ History of the English Poor Laws in a second hand shop, and it’s taken me a few months to get round to it.  My attention was caught by a couple of references to schemes for avoiding the Poor Law, which I hadn’t come across before.  One was Acland’s Universal Benefit Society, effectively a proposal in 1786 for  a scheme of National Insurance.  Another was proposed by Baron Maseres, who attempted in 1772 to create a universal savings plan which would deliver a lifetime annuity of between £5 and £20 a year for men over fifty, and women over 35.

Maseres worked out the costs scrupulously on the basis of actuarial tables of life expectancy.  He argued that

The design of this bill was to encourage the lower rank of people to industry and frugality, by laying before them a safe and easy method of employing some part of the money they could save out of their wages, or daily earnings, in a manner that would be most strikingly for their benefit. …  if they saw an easy method of employing the money they could spare in such a manner as would procure them a considerable income in return for it in some future period of their lives, without any such hazard of losing it by another man’s folly or misfortune, it was probable they would frequently embrace it: and thus a diminution of the poor’s rate on the estates of the rich, an increase of present industry and sobriety in the poor, and a more independent and comfortable support of them in their old age than they can otherwise expect, would be the happy consequences of such an establishment.

The measure, watered down to allow for reluctant parishes to opt out,  passed the House of Commons,  but it was blocked in the Lords.  It’s not a Citizens Income scheme, but it has some of the characteristics and aspirations of a partial basic income, nearly twenty years before Thom Paine’s more radical and more universal approach.

Additional note:  I’ve appended an extract from Maseres’ text, where he explains the scheme,  in PDF form here.