The Conservatives had suggested several times that family benefits might be restricted for families with more than two children – I discussed the point on this blog nearly three years ago – so it wasn’t altogether surprising that Tax Credits are being stopped for the third child and above. As social policy, however, it makes very little sense. The most obvious problem is that it will make child poverty worse, especially among working families. Stopping benefits for the third child doesn’t mean that only later children suffer. There may be parents who will allocate resources according to the legal entitlement of their children, but there can’ be many of them. When benefits get cut for one child, the burden is spread across all the family, and the other children will suffer, too. The second problem is that the penalty is very difficult to avoid. Relatively few people have additional children while they are on benefits – not that many people have a third child at all. Those who do may be in work; they may be forming new relationships, and new families. There’s no reason to suppose that this penalty will have much effect on people’s behaviour – or that it could. That also points to the third odd thing about this policy; it won’t save very much money.  Lastly, though it sounds like something that should be easy to do, it’s anything but:  it will have to be introduced gradually, there will  be exceptions, and there will be a certain amount of administrative churning as older children come of age.  It’s difficult, then, to see what the point is, apart from conveying disapproval to people who have the temerity to have  more children than a prescribed norm.

A clip from the National Archives reminded me of how far we’ve travelled from former opinions. in the 1940s there was some concern about the inadequate size of families. Britain never went down the same route as France, which pursued a deliberately natalist policy, favouring families with four children or more. In Britain Family Allowance was available only for two or more children. The justification for that was that greater family commitments were considered to be more difficult to manage, and more in need of support.  The rule lasted until the introduction of Child Benefit in the 1970s. 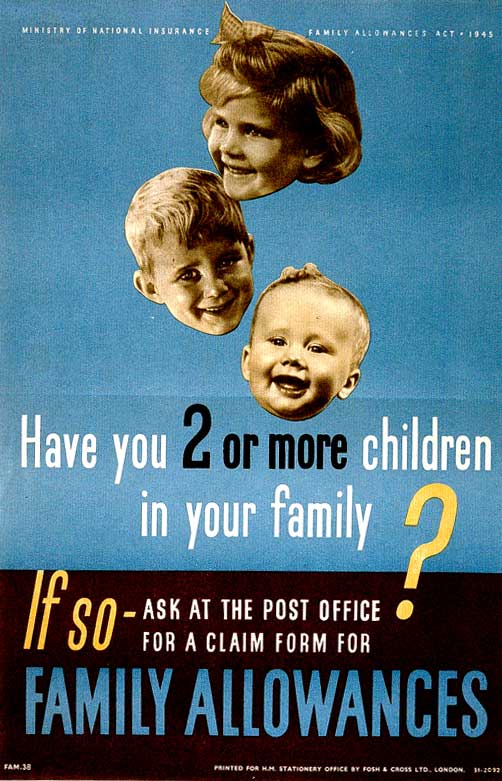 One thought on “Stopping benefits for the third child”