As part of its general discussion on Social Justice, the Scottish Government has released a ‘stocktaking’ document outlining issues in social security.  It’s broadly based and well informed, drawing on comments from a wide range of third sector organisations.

I was alerted to the document’s existence by a Scotsman article suggesting that this could be the end of Winter Fuel Payment: the paper comments that WFP is not targeted and not spent on fuel, and that is apparently taken as a cue to get rid of it.  It’s true that WFP is not targeted, and that it’s not necessarily spent on fuel.  Indeed, it was a surprise to find, in earlier research, that it made any specific difference to fuel consumption – it seems that, contrary to economic theory, people are actually swayed by the name in deciding how to spend it.  The point of WFP is more easily understood if we forget the terms ‘winter’ and ‘fuel’ – there’s a cold weather payment for that.  It’s the only universal benefit that goes to everyone in certain benefit groups, and that means it’s a very useful tool – I made the case in a previous blog here.  Unfortunately, as it stands the Scotland Bill doesn’t contain the powers to use it. 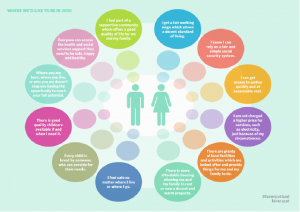 There are more general points to make about the developing of a social justice strategy, and I expect to return to those as the policy takes shape.  There are two obvious problems.  The first is that the definition of ‘social justice’ is far too wide.  When the Labour Party created a Commission on Social Justice, the findings got translated into a party manifesto – anything that happened to make a good society.  The Scottish Government’s approach is already showing signs of a similar problem: their vision for a Fairer Scotland says that communities should be good places to live and that children should be loved.  Which of course they should, but if justice means everything, it doesn’t mean anything.

The other problem rests in that awful word, ‘vision’.  The Scottish Government asks people to say what the country should be like in 2030 – and the sort of answers that come back are that there won’t be a bedroom tax and that carers need flexibility to work or study.  Those are issues for now, not for years to come.   Tony Crosland made a fundamental criticism of this kind of policy-making.  There is no way of staging changes so that a blueprint or vision can be implemented: every change we make along the way changes the conditions we’re addressing.  What matters, Crosland argued, is that we apply principles, so that we can justify each and every step as we take it.  We’ve no way of knowing what the future will actually be like, but what we can do is to make things better than they are now.