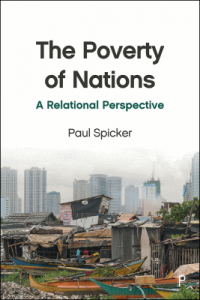 The print copies of my latest book, The Poverty of Nations, have just arrived.  I can’t physically lift the parcel at the moment, because yesterday I fell off a ladder and after a trip to A and E I’m currently shuffling around with an NHS-supplied walking stick.  Getting the books is nevertheless invigorating enough to merit a trip to the keyboard.

The book develops an argument I’ve been building over the last few years about the relational elements of poverty – understanding poverty, not as a lack of resources or income, but as a set of social relationships. The contents list looks like this:

I’ve previously put out some explanation about my line of thought.  Here’s an earlier summary of the central argument:

Poverty is at root a relational concept, which can only be understood by locating the experience of poor people in the social and economic situation where they are found. This is not just saying that poverty is ‘relative’. Developments in policy and practice are increasingly focused on dynamic, relational and multi-dimensional understandings of poverty; our conceptual frameworks have failed to keep pace.

Much of the consideration of poverty in the course of the last hundred years, relative or absolute, has found it convenient to rely on three fallacies. The first is that poverty is a condition or state of being, which can be considered exclusively from the perspective of the individual who experiences it. The second is that can be understood solely in terms of resources, when resources themselves have to be understood in terms of social and economic relationships. The third is that there is a clear and decisive threshold below which people can be said to be poor, and above which they are not poor.

All of these positions are tenable – they are supported by many of the most eminent writers in the field – but they are not adequate, either as a way of describing the positions that people hold, or as a conceptual tool to analyse the issues. Discussions of exclusion, a concept which is self-evidently relational, come closer to the idea of poverty than much of the academic literature on poverty in itself, offering a way to escape from the limitations of conventional models of poverty.

I know that there are many people in the field in the UK who will disagree with me.  When I put put a short piece on the Social Policy Association website, one response looked like this:

Why is it so difficult for so many people to grasp that the concept of poverty itself is the serious lack of the necessary and adequate resources …? What Paul Spicker and thousands of others describe is the consequential deprivations, as if accumulating descriptions will clarify the conceptual point….. That suggests ideological bias.

I’m encouraged, however, by the reaction of people who work in the global South, whose reviews are on the Policy Press website.  Michael Noble, who I’ve not worked with, wrote this:

For those of us working in developing countries where minimalist monetary measures of poverty dominate, this book provides a welcome enjoinder to place social relationships centre stage in poverty discourses and when considering policy solutions.