It’s a small but obvious point.  You vote, in the UK, for a constituency MP.  Most MPs (but not all) have affiliations to a political party, but in principle  you are voting for the MP, not a party – which is why some Conservative MPs and some Labour MPs  have been able to change their allegiance and join different parties.

This General Election is not, and cannot be, a contest for votes between Boris Johnson and Jeremy Corbyn. Our electoral system works quite differently.  If in 2015 you voted under the misapprehension you were voting for David Cameron as PM, you got Theresa May.  If in 2017 you voted for Theresa May, you got Boris Johnson.  The same would have been true if you voted for Tony Blair in 2005, Thatcher in 1987 or Wilson in 1974.

For what it’s worth, I live in North-East Fife, the most marginal seat in the country – in the 2017 election, there were only two votes between the SNP and the Liberal party.  Labour, Conservatives and the Brexit party are not really in contention.  Nevertheless, I’ve now had three glossy cards through my door from the SNP which offer me photographs, not of SNP politicians, but of Michael Gove and Boris Johnson.  I should be able to create a set of placemats that will be the talk of my friends. 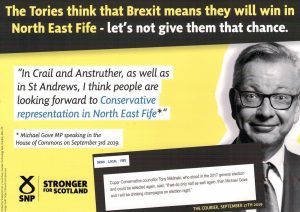