I’m old-fashioned, and I’ve just been upbraided for it.  An article by Brian Monteith in the Scotsman made a number of claims which I thought rather far fetched, so I looked at some other evidence.  Monteith had written, at some length, that “the Euro currency project has been an economic catastrophe”, that since 1994 the growth of the US economy had far outstripped the Eurozone, and that if only the UK had not been within the EU we would all have been much richer. I checked some basic figures with the World Bank’s data and wrote this:

Growth in the UK, by contrast, was only 110% over the same period. If only our economic performance had been as good as the Eurozone’s.

This, I now know, was totally misguided, because it attracted this as a response:

You’re living in the past !….”Paul Spicker”
Any fool can quote PAST statistics !
Nothing to do with future prospects !

So there we are.  In the course of the last few years on the blog, I’ve tried to back up everything I say. The mistake I’ve been making all this time is to take statistics and evidence from the past, when they should have come from the future instead.  What I should have used is the crystal ball – I’m working on it. 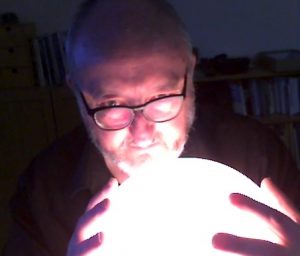 Perhaps I should add that “Paul Spicker”, given inverted commas in the rebuke, is not an invented personality. I obviously lack the imagination that I need to contribute to social media.

One thought on “An old-fashioned approach to evidence? Guilty as charged.”