How shocking, a letter in the i comments, to learn that some left-wing people are joining the Labour Party:  whatever next?    Here’s some very old-fashioned political science.  Assuming that we can identify parties in terms of ‘left’ and ‘right’, then the mainstream  distribution of opinions  is likely to be somewhere between the two – if it isn’t, the parties will have to shift to win elections. 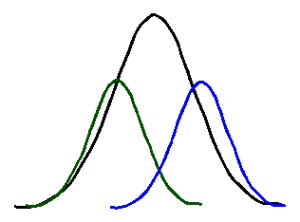 The graph shows what happens.  The party on the left, shown in red, has shades of opinions that fall far to the left of the centre.   The party on the right, shown in blue, has shades of opinion that fall far to the right.  If they didn’t have unrepresentative views, they wouldn’t join a political party.  (The curves don’t have to be normal – I’ve never come across any normal curves in real life – but that’s not important to make the point. )

Now, this is, as I started by saying, an old-fashioned way of looking at things.  It assumes that we’re talking about two parties, and that the division can sensibly be interpreted in terms of ‘left’ and ‘right’.   (There’s nothing intrinsically left or right wing about lots of major issues, such as Europe, or nuclear weapons, or Syria, or green energy, or many of the issues that people care about.)  It does help, however, to understand what’s happening in the Labour Party at the moment.  Of course the membership don’t have the same preferences as the general population: that’s why they’re there.   And of course inviting people to enlist is mainly going to attract people from the pool of potential supporters, not from the political opposition.  With more than 600,000 people registering as supporters, it looks as though the strategy has been a rip-roaring success.

I’ve previously argued, however, that what happened in the last election is not a question of left and right.  What happened in the Scottish referendum, on both sides, was mass public engagement.  The General Election, by contrast, was marred by disengagement – confected photo-opportunities, the selection of audiences and exclusion of dissenters, manifestos that were designed to offer a product rather than to reflect the outcomes of political discussion.   If the Labour leadership contest marks a movement to a different kind of politics, it’s a good thing.