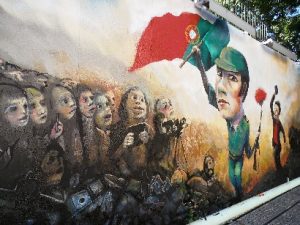 I’m two days late, but then I was late for my sister’s birthday as well, and I hope I can be forgiven if I mention it now.  It’s 40 years since the Carnation Revolution of 1974 led to the fall of the Salazar government in Portugal and the birth of a new social democracy.  (If you missed the anniversary in the British press, it might be because they didn’t think to mention it.) It’s too easy to forget what Europe used to be like before the EU. Portugal has its problems, but it’s more prosperous, more secure, better housed and better educated than it used to be. Happy anniversary.