I’m indebted to Gareth Morgan for drawing my attention to a discrepancy in the figures for the new pensions scheme.  Gareth had drawn information from the Sunday Times, which had discovered from an FoI request that “Two-thirds of the people who reach state pension age in 2016-17 will not receive the full pension, according to the DWP.”   The Sunday Times had been told: “For most people who retire next year, the weekly pension will fall short of the headline figure by an average of between £35 and £55 a week … For those who retire in 2020, the average shortfall will be between £15 and £25. I was referring to different information from the DWP, which suggests that 45% of people will get the full rate (I’ve shown the graph here: the numbers are on page 35).  These figures can’t all be right. 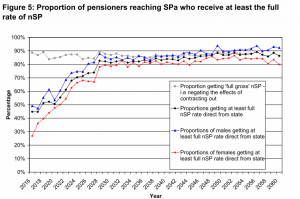 Part of the explanation may be, I think, the apparent disappearance of large numbers of women from the figures in the second report (see figure 24, page 37) – and I’m not at all clear how as few as 20,000 women come to be counted as 27% of all those retiring.  I suspect that the Sunday Times’s figures are more trustworthy than the DWP’s.

Further note, 6th April:  I’ve had an explanation from the DWP.  The totals they presented were rounded to the nearest 10,000, while the percentages were left alone.  That explains how 20,000 gets to be treated as 27% of 90,000.   The huge approximation – on a figure of 20,000, plus or minus 5,000 is 25% in each direction – means, unfortunately, that the figures in the report don’t add up.  The main surprise is that official statistics can be presented with such little regard for the data.