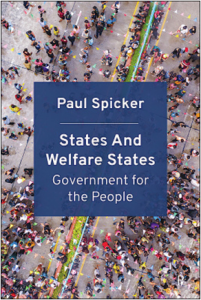 States and welfare states is my twenty-third book. Its main arguments are that:

This leads to some distinctive insights about the subject matter:

Forty years ago, while being interviewed for a post in a relatively prestigious university, I said that I wanted to work on the theory of social policy. I was told that that didn’t exist as a subject.  This is my ninth book set in that non-existent field, and I’m not convinced that people out there are any more persuaded of  the relevance of theory now then they were then. One reviewer complained of the ‘high level of abstraction’; two others said it was ‘connected to policy’ and ‘clearly (and always) topical’.  Two reviewers thought it was original; one that ‘it will not say anything new to academics in the field’; and one more commented that, rather than being distinctively original, ‘it does draw together a variety of ideas … ‘ Yes, that’s what original theory does. Theory is used to clarify, to structure and to identify the relationships between ideas and evidence. The originality comes from the distinctive synthesis and critical evaluation of material, not from new facts.